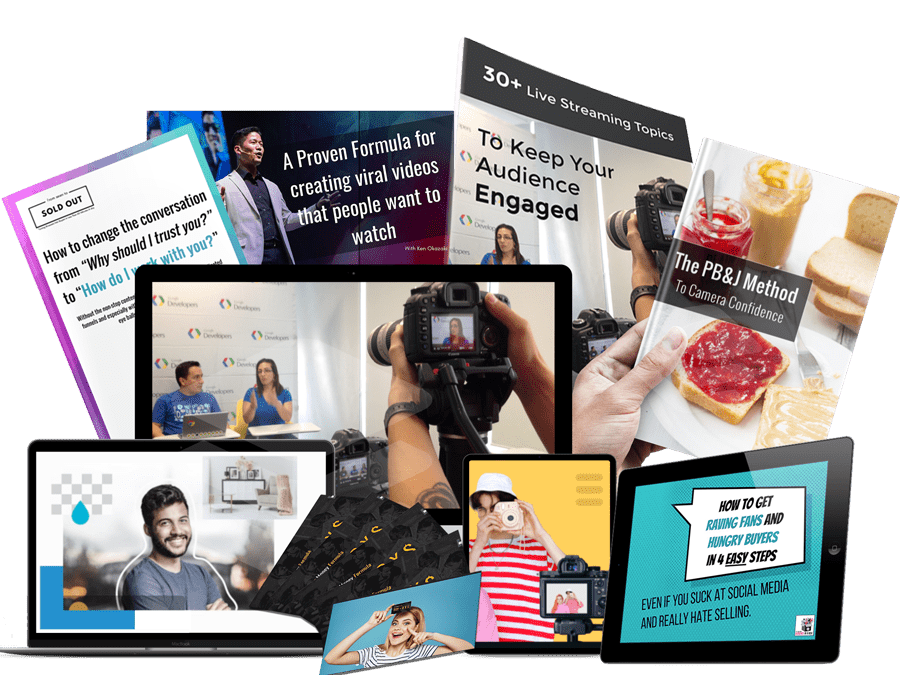 EVERYTHING you need to Start cru$hing it with live streams.

The ONLY bundle you’ll ever need to

turn your live streams into cash.

Without looking stupid on camera and even if you have a small audience and are afraid of selling.

Unless you’ve been living under a rock for the past couple of years you’ve at least attended one livestream and maybe even hosted some yourself!

In fact, it’s better than it’s ever been. It’s more effective, faster, more certain to get you results and EASIER than ever before.

People love watching them, which is why Silicon Valley is practically running an “Engagement Race” among the big tech companies.

And hey the Pandemic actually helped this phenomenon explode.

In fact according to Business Week “People are getting on live calls almost 19X more often than in 2018”.

Live Streams are massively popular, and you may be thinking “oh but that’s saturated already, everyone’s doing that”, right? Wrong.

In fact according to MediaKix, “Less than 35% of marketers with access to live streaming, actually stream ANYTHING at all”.

What? Less than 35% of people actually stream ANYTHING?

And it gets even better…

While 35% of social media accounts is still a massive number, this means it’s a HUGE – and still unsaturated – avenue.

And here’s why it’s even better today….

Why? Because they don’t know how to make it work FOR THEM.

Like a pen is a tool you can doodle or write a masterpiece with, live streaming is just that a tool – a very powerful one.

A tool that’s built to generate trust, engagement and to deliver incredible value to your audience.

In such a way where the authenticity and expertise effortlessly shines through, and the just-in-time nature of it inevitably creates a “WOW effect” in the mind of the viewer.

Now most people get on lives and either:

What if there were a THIRD way?

What if I told you… it exists?

And I’ve spent the past 8 years perfecting the way to use live streams to help business owners like you charge what they’re worth while also still doing what they love.

Let me show you what I’ve figured out…

80% of women describe themselves as sports fans and are willing to pay up to 50% more for over-the-top content. 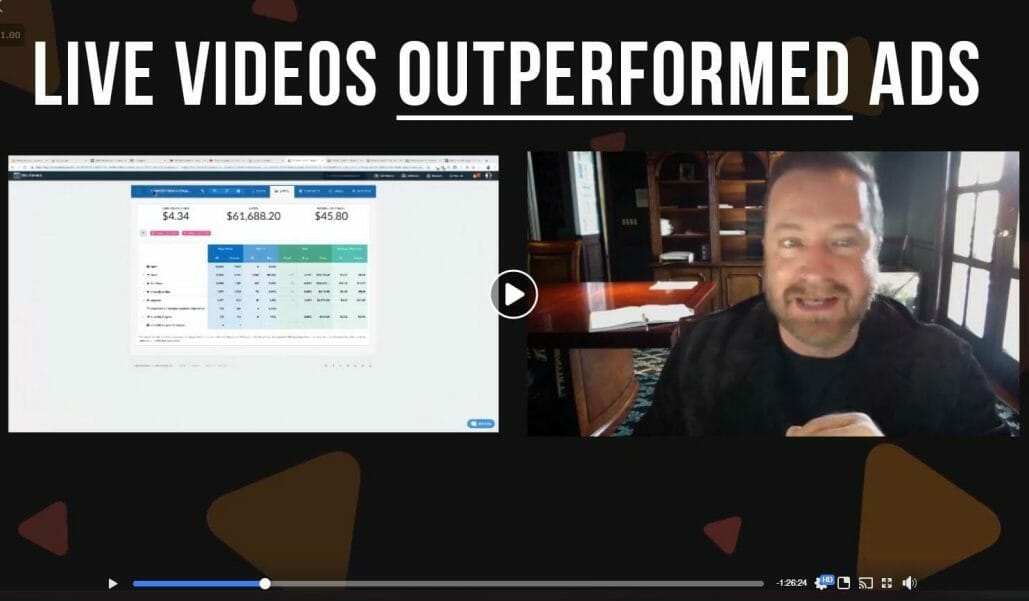 Do you know that live streams done right outperform:

If you’re a coach, a consultant, a course creator, selling a product or a service, you’ll do better with live streams that are done right.

Just how much better? 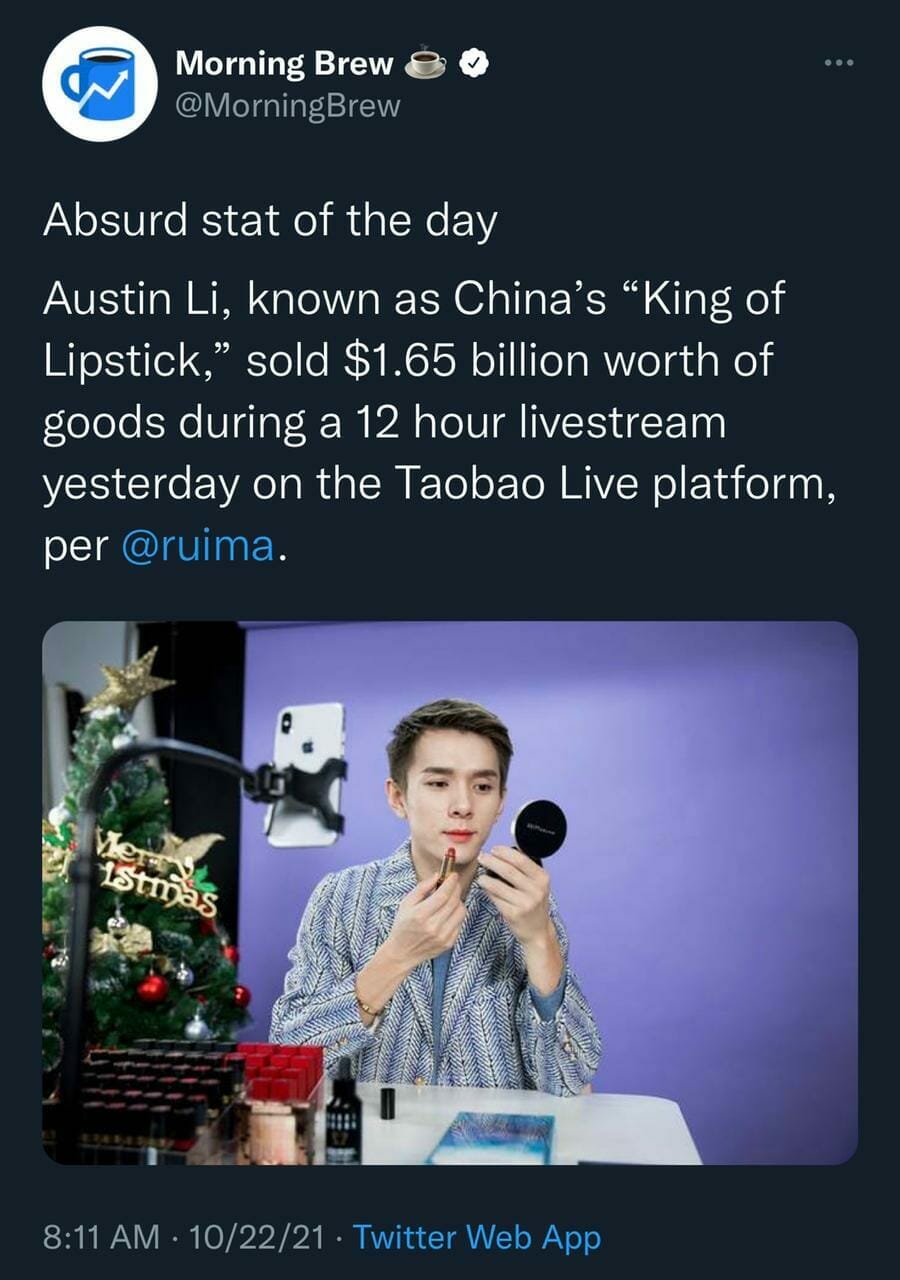 Not Just For The Rich And Famous

Following my model, Gary Vaynerchuk goes live every day and talks to his fans in real time… across all platforms.

Roland Fraiser, Principal at DigitalMarketer and international investor using my engagement model connected with his followers to sell more access (not information) to him and his friends.

But Every Day People, Like You And Me, Are Secretly Getting Fantastic Results Too: 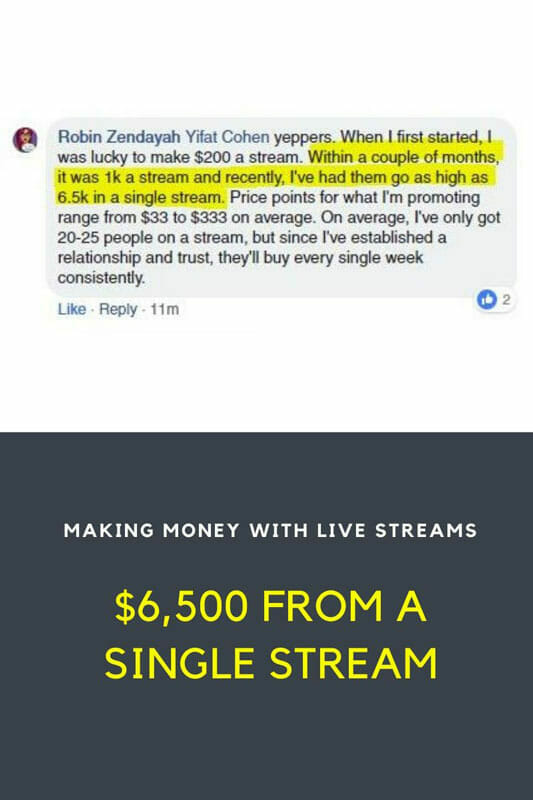 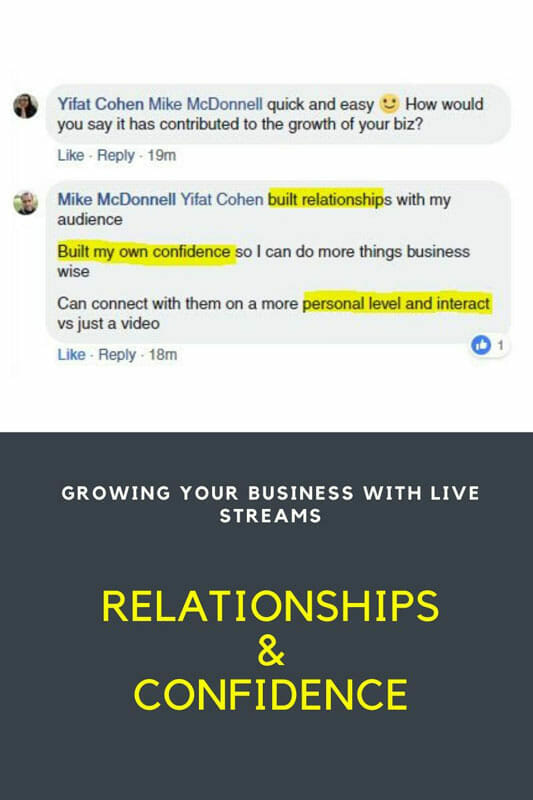 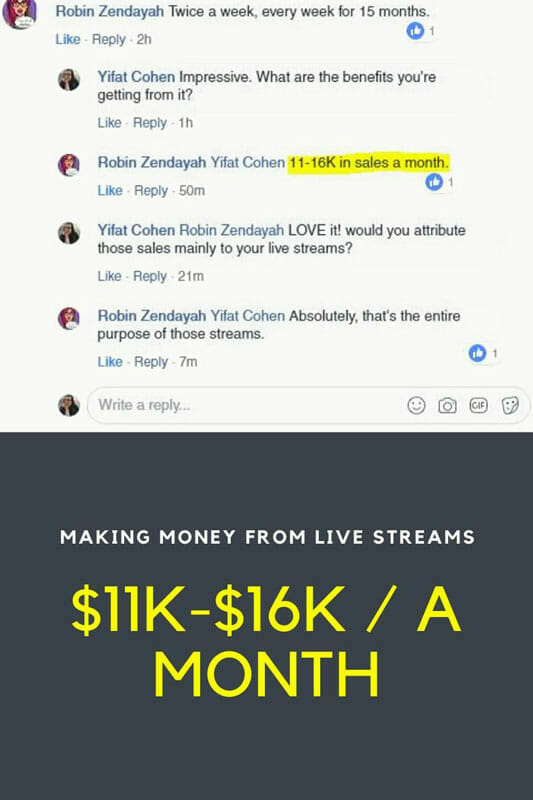 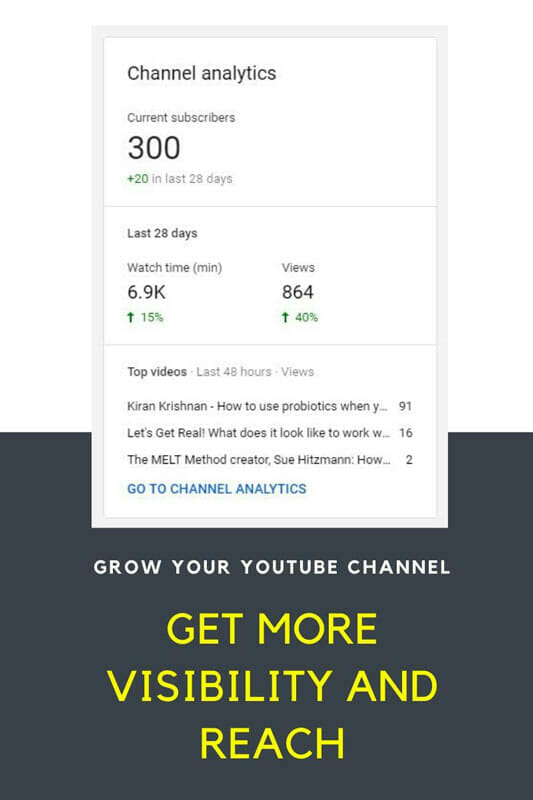 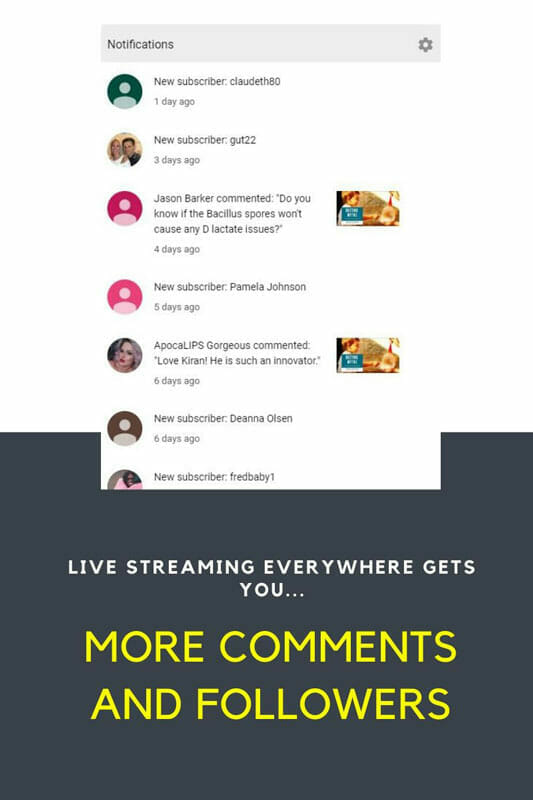 Most people are missing out

Because they don’t have a proven system to follow

Are you being told over and over that you need to have video for your biz… but you can’t stand to see how you look on camera?
Hanging out on camera used to be so nerve-wracking. You’d spend hours fretting over the type of clothes to wear, the lighting, the sound quality, and who knows what else – and you’d still end up looking like an amateur.

This special bundle will get you newscaster ready in just 5 minutes or less. You’ll feel confident on camera, understand your audience, and get paid to be you.

a Simple roadmap you can apply today!

Why learn from Yifat Cohen?

Downloaded the Worksheet. I’ll be sure to share after I officially practice the PB&J Method.

What’s inside your bundle 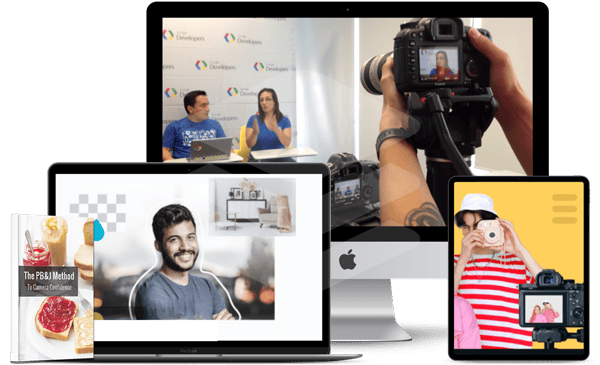 Use the PB&J Method to get newscaster ready in five minutes or less.

You don’t have to be a natural in front of the camera to be seen. We show you how to feel more confident, look your best, and have the skills to get your message out there.

A full video training and workbook to track your progress, so you can actually SEE how your self-confidence is building up.

PLUS – How to remove, replace and blur your background without a Green Screen.

Discover the cutting edge background removal and blurring hack possible with any webcam, without the need for expensive green screens, and complicated lighting setups.

Know EXACTLY what to say

You’ll never be unprepared for a Live video again! Never sound stupid or like an armature when you press the Live button.

Get over 30 topic that you can use to build your authority and your brand with live streams.

These topics are specifically designed to build your business and grow your visibility. 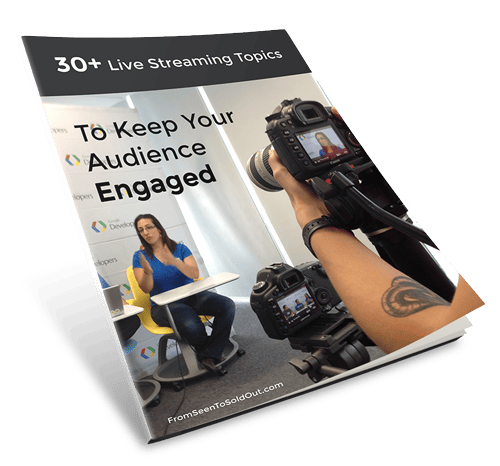 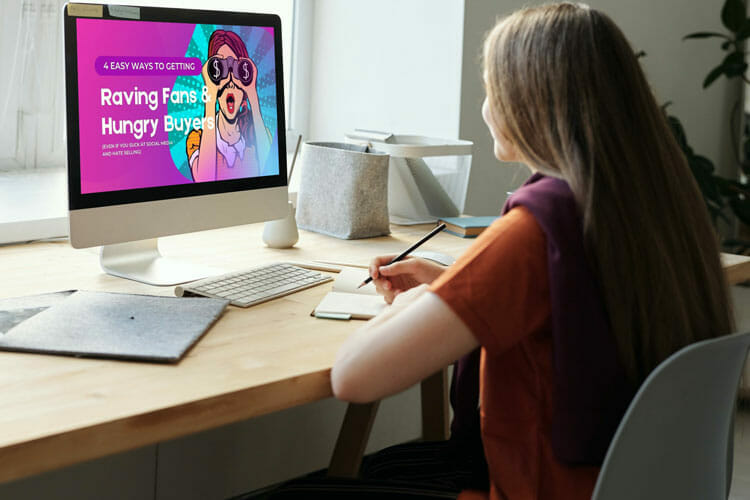 Just starting out? This deep dive training will help you discover where your audience hangs out, what they’re craving and how to offer it to them.

You’ll also learn how to make quick cash without a website, a product or an offer (highly requested)

Gain access to an exclusive interview with the head of Oz Media Global – Ken Okazaki and get a system that works for you – the HILDA system.

HILDA uses a video structure that ‘s been proven over and over again to perform well on social media.

H: It starts with a strong Hook
I: You make a short introduction
L: You lead the viewer’s anticipation
D: Deliver your content
A: Altruistically ask for a micro-commitment

When you follow this simple format you will not only see higher engagement – but most importantly – an increase in ACTION TAKERS. 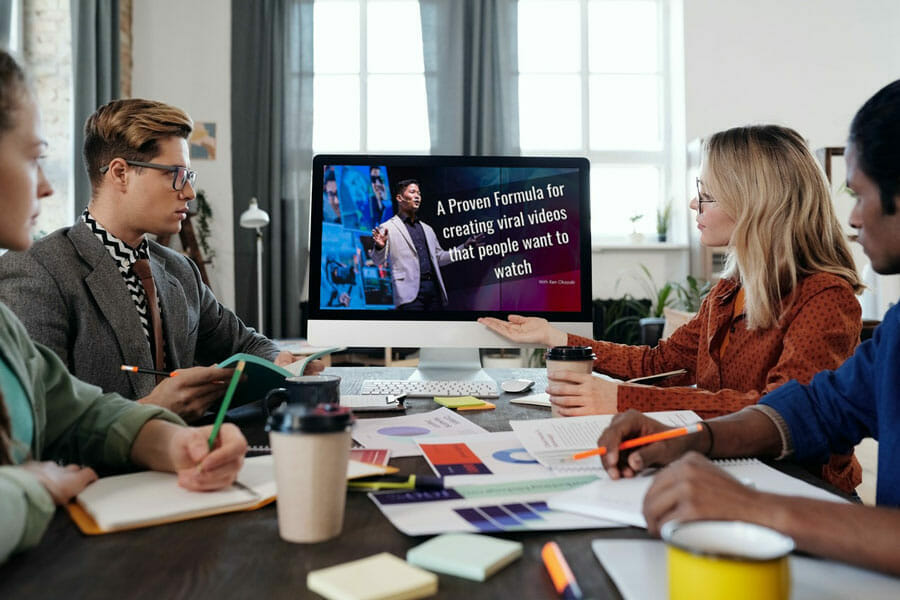 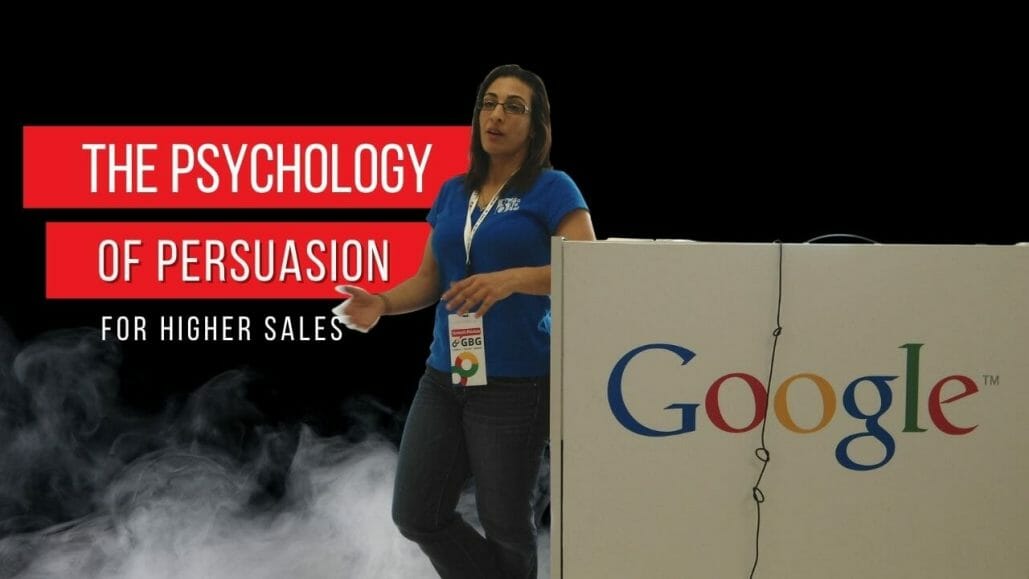 Use the psychology of Persuasion for higher sales

Cialdini’s 6 principles of influence are: reciprocity, commitment and consistency, social proof, authority, liking and scarcity. This training gives you the science and the know-how to apply these principles in your online marketing.

Change your life and live your dream by learning these principles and applying them to live streaming so you can be the authority in your niche, motivate your audience to take action and become who you were meant to be. 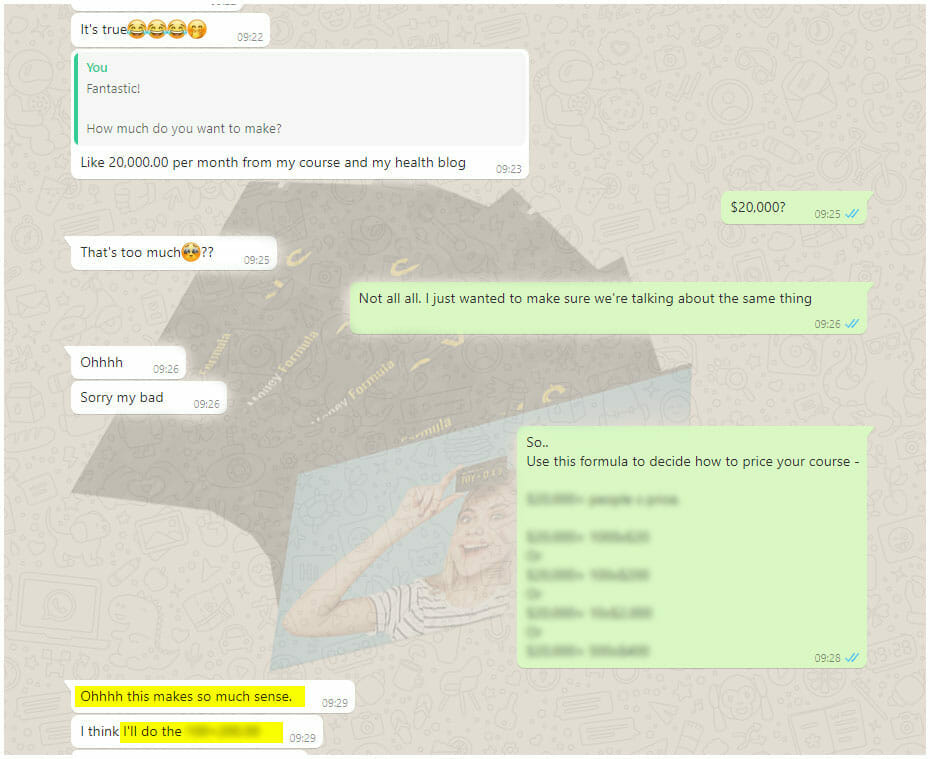 Take the guesswork out of pricing

Many people go about pricing their services wrong. They’re looking at unit price and worry that it’s too high, that no one will buy it and they get stuck in overworking and not making enough to support the lifestyle they want.

There’s a much easier way – decide how much you want to make a month and then use the money formula to make sure you don’t have to work too hard to make it.

“I was afraid of the camera, now I have lead generating campaigns”